Single column lift. The single-column lift is a special equipment for lifting vehicles such as cars parked on the ground to a certain height for maintenance. It is a typical partial lift for automobiles and engineering vehicles to replace wheel tires or A machine that performs various maintenance operations on the vehicle chassis. It has the effect of saving time and effort, and is completely placed on the ground when not in use, which is convenient for the car to reverse and place items. Single-column vehicle lifts are available in both movable and fixed versions. 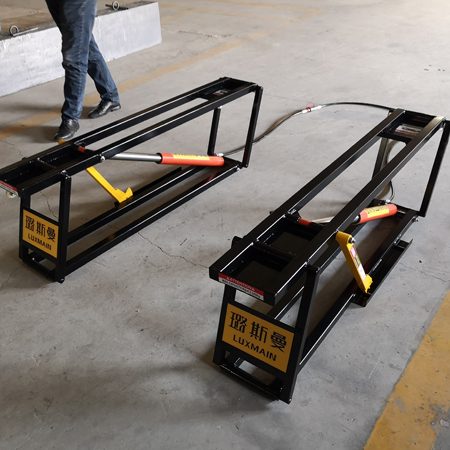 Double column lift. The two-post Portable Car Quick Lift is a special mechanical lifting device commonly used in car repair and maintenance units to remove the bottom plate in order to save material. Therefore, the foundation is very demanding, usually the two-column lift has two types of symmetrical and asymmetrical. The arms of the four arms of the symmetrical lift are roughly equal, so that the center of the car (or the center of mass) is in the middle of the column. This type of symmetrical lift is used for the daily maintenance of cars such as pickup trucks and vans. Probably the best choice. However, for some symmetrical double-column lifts with insufficient width between columns, it is a big disadvantage to not open the door after the car is lifted.

Scissor lift. The Scissor Portable Car Quick Lift performs in the form of a scissor-stacked, electrically driven mechanical transmission structure that is primarily used for large vehicle maintenance. The scissor lift has a moderate lifting speed and does not occupy the pit position. It is the best choice for some models with relatively fixed and high work intensity (such as in the bus). In addition, due to its simple structure and good synchronism, it is also commonly used in the platform of four wheel aligners.

Trench lift. The trench-type Portable Car Quick Lift is ideal for large bus repairs and is more practical and inexpensive for low-rise buildings. The trench type car lift is installed on the two side rails above the trench, generally adopting electric drive mode, and the worm and the worm wheel are decelerated, thereby driving the screw rod and lifting the beam to lift and lower. This design makes the trench type lift more flexible, with higher lifting force, stable lifting, and convenient operation and installation. It is the most ideal lifting equipment for maintenance companies that are responsible for maintenance of buses and trucks.